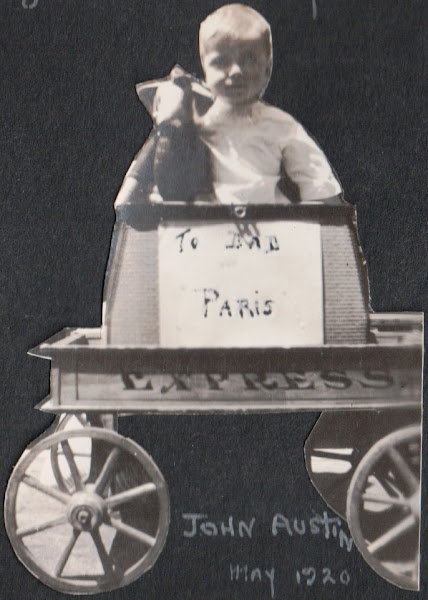 Who do you think I ran into on Thursday, June 3? Why Eleanor! I was sauntering back to my hotel, when lo and behold I spotted her on the corner of the street. I immediately made a beeline for her, & when she got her breath, she was just as surprised to see me as I was to see her. She has improved wonderfully and talk my God, she can and then some. Last night I had her round for supper and we went to a show afterwards. She was very pleased with the whole arrangement for she had just arrived in Paris from Athens. She sails for New York on Thursday, 10th inst. & should arrive there about the same time as this letter.

Today we all visited Versailles. It is a glorious place. At 2 o'clock they turned on the fountains some 200 of them & my camera was pretty busy. Took over a dozen pictures. I have quite a collection of them by now.

The weather here is quite cool, for I am forced to wear my spring coat each day. The rain has kept away so far, making it very pleasant but having to work pretty hard, I do not get much time to take in any of the sites during the day. My part of the work I am getting out very fastly [in a secure or firm manner], for the time is about a month away when we shall sail, & we have several important matters to decide upon. I hope I shall be able to get back to London for a time for a few days to bid goodbye to my friends there, but I am placing no hopes upon that event.

How are nanny and Bud? Gee won't I be glad to see you both again! I am afraid I will have to report that I am not much fatter. Maybe in the head but not in the body. I eat like a king each day, but to no avail.

I trust you found everything okay in Boston and that the bride is quickly returning to health again. Harry, I hope is making the mayonnaise slide all over Boston.

How about a letter?

Love to all and kisses to self & Bud,

Photos of Versailles - I wish I had in my possession these photos mentioned here. I found the above postcard online.

Harry Pape - Harry & Piedad Pina (Honey's sister) were married on 4 June 1919. They were living in Boston where Harry opened his business as a distributor of Blue Ribbon Mayonnaise later known as Hellman's & Best Foods. This explains why our family only eats Best Foods! See a future post about Harry Pape's successful business with Richard Hellman. 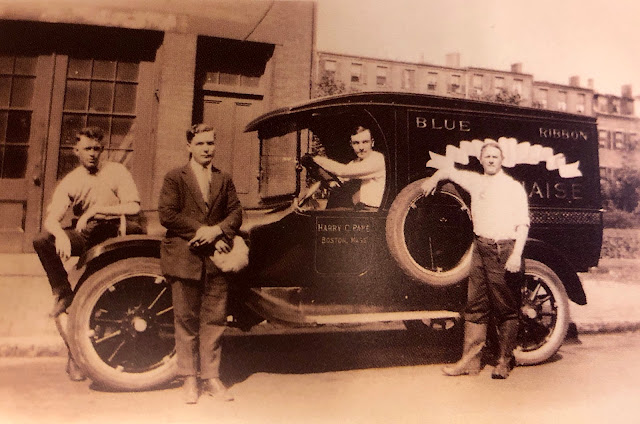 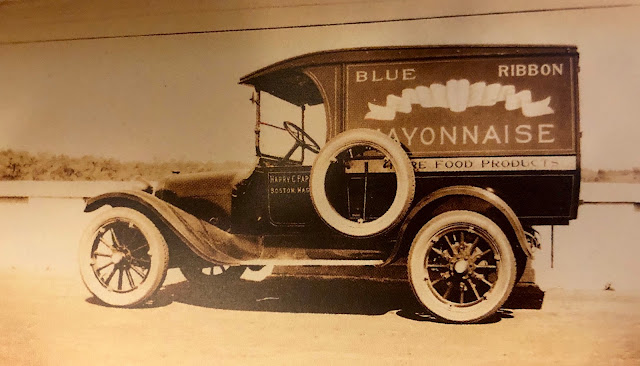 Posted by FamilyFilmFabricFood at 9:21 AM No comments: 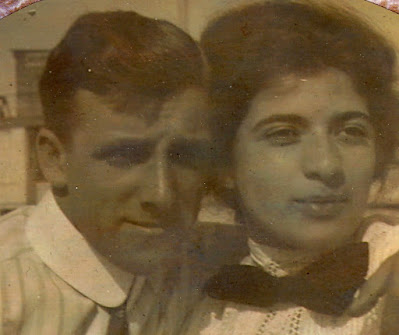 My family & I had the duty of going through her belongings & deciding what to do with them. The three divisions included donate, trash & keep. Two weeks later, I had my second hip surgery for that year. I also had to move location at that time after the sale of mom’s home. It took me a while to go through the family boxes, I wanted to keep. I found these letters in 2020 during the Covid-19 shutdown, which one would least expect. They were in boxes labelled Virginia. What? Why?  What else did new Papa want to say to his bride while he was away?

As the days come & go I feel terribly lonesome for you & Bud. Just to hug you both is about my only desire just now. Loughry & Brough [coworkers] leave for Paris tomorrow leaving me quite alone in this big lonesome city.

I am by myself just now, Brough having gone to church, & I have sat out in the lobby, after a very hearty supper, listening to the orchestra, but I long to be back in my own kitchen giving the dishes their nightly bath.

Went to the service this morning to hear Dr. Jowett preach at  Westminster Chapel. My what a multitude of people were there!

Most London people dress with very little taste, the women wear styles that we would term 3rd Ave. High skirts, almost to their knees, usually white or grey stocking & black low freakish looking shoes. I have yet to meet a half-decent-looking girl.

On Saturday night, Brough & I went to see the Little Whopper at the Shaftesbury Theater on Piccadilly. The play was particularly good, but they were all English.  Your mother would have had a lot of fun at the way they talk. [His mother-in-law came from Germany.]

My room here in the hotel is very large but awfully cold. In fact, I have not been warm since I left Brooklyn. Coal is impossible to get, as is also sugar. I am quite accustomed to drinking my coffee without any sugar. The meals here are excellent & quite reasonable in price.

I will put off getting that suit until I get home, as I do not care for the styles they wear here. Before I leave I intend to buy you a few Irish crochet collars & anything I happen to see.

How is my Buddie. [?] I feel that a few words from you would make me feel a little happier.

When are you going to Boston? Tell Piedad & Henry I have not their address, so could not write them.

When you next hear from me I will be in Paris as I leave for there on Monday 17th May. If you write, I trust it will be to E.W.B. Co. London, for if I am not there, they will forward my mail to Paris. Watch the “Eagle” [newspaper] for when I get to Paris. I will register with the N. Y. Herald & they will publish it in N. Y. papers.

Give my fond love to all at home & kiss my Buddie for me.

At a later date, Honey writes on the back of letter: For Marty [her daughter-in-law & my mother]. I have 2 other letters for Eileen [her daughter]. These 2 letters will be in my next blog post.

To find the previous 2 posts covering his 2 other letters click below with explanations for his trip.

Here are some interesting facts I learned from this letter about the time in London in 1920.

-I looked up information about the Hotel Russell he was staying at for a few weeks. It was finished in 1898 by designer architect Charles Fitzroy Doll on the northeast corner of Russell Square. It was the first building in London to include in-suite bathrooms. It is currently named the Kimpton Fitzroy London Hotel.

Here is a YouTube video about Hotel Russell which covers its exterior & interior. I can just picture Pop Cooper going down the elegant staircase. Start at 2:26.

-Dr. John Henry Jowett, 1864-1923, minister of Westminster Chapel, whom Pop heard while attending this church in London. Dr. Jowett had his theological training in Edinburgh & Oxford. He served in two churches in England for over 20 years having a great spiritual influence on each community. He came to the United States in 1909 to address a Christian Conference in Chicago, Illinois, founded by Dwight L. Moody. He came back to America to serve as a minister at a church in New York City in 1911. Jowett returned to England in 1917, to lead the congregation at the Westminister Chapel in London. He gave up his preaching by 1922 due to declining health. Dr. Jowett died the following year. He made a great impact on his congregations with his knowledge, language & power of his ministry. His congregations grew in numbers under his teachings. Pop made a comment on such a large multitude of people. I wonder if Pop knew about him when he preached in New York City?

-Sophie or Honey, his bride, was going to Boston to visit her younger sister, Piedad. Piedad married Harry Pape the year before.

-Irish crochet collars. Do I have any of these? I will have to look through mom's collection of crocheted items.

-Overseas mail in 1920 was only sent by ship from London weekly. It took about 2 weeks for letters to arrive in New York. Many of Jack's & Honey's letters would cross over because of this time length.

Posted by FamilyFilmFabricFood at 6:38 AM No comments: 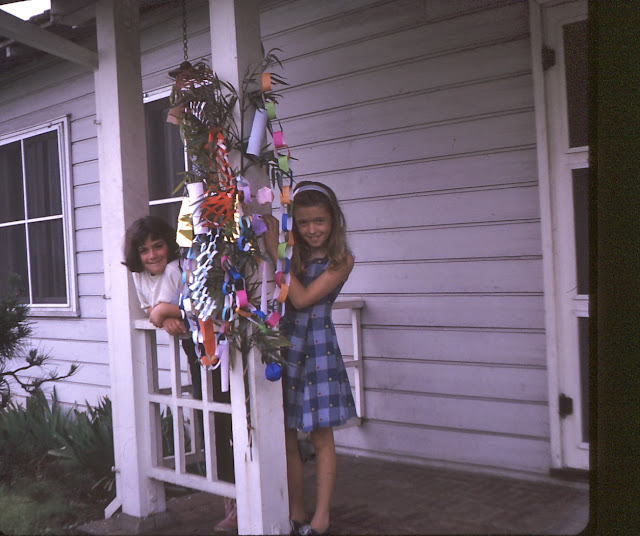 My father was a military Naval Officer. In the late spring of 1964, the USS Oklahoma City CL-G5 was sent to Yokosuka, Japan, to serve in the Vietnam Conflict. My mother, brother & I were left in California to pack our belongings up to put in storage or to bring along with us. In early July, the three of us boarded the MSTS GENERAL DANIEL I. SULTON en route to Yokosuka, Japan. My father had found local temporary housing in nearby Kamakura. It was a small Japanese home we lived in for 2 months. He was out to sea a few days later.

Above, the side veranda. 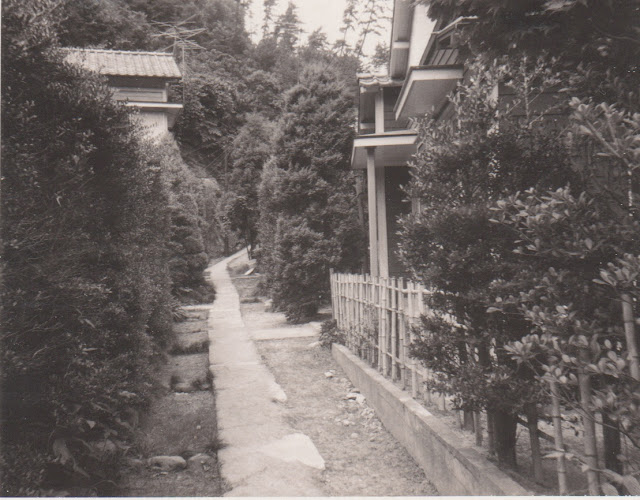 Walkway to the house front gate on the right. 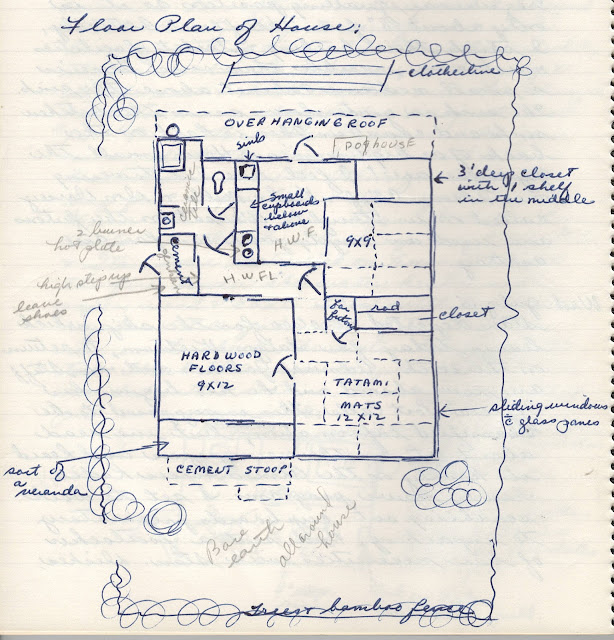 Mom would draw out the map of each of our homes every time we were moved to a new duty station in letters to her families in the United States.

Mom with other new Navy housewife friends would daily go to Yokosuka Naval Base (where Gib & I attended school. Gib at Kennick High School or known as YoHo High & Mary at Sullivan Elementary.) Mom would attend to daily needs & errands while we were in school. On other days, the wives would look for housing together discovering what was available for them. Many USS Oklahoma City wives were living in Negishi Heights, and Mom added her name to the waiting list.

Regarding transportation, Mom had our car transported here to Japan. It was a Mercedes Benz. She could not drive it until she obtained her Japanese driver's license. Another story. 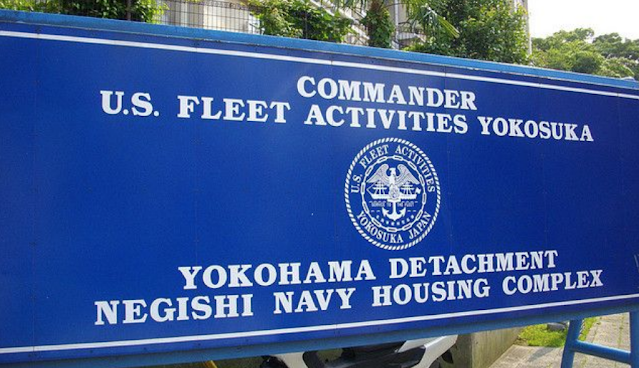 We moved into 643 Skyline Drive on 12 Sep 1964. The USS Oklahoma City returns the day before. Dad sees the house & approves. Mary started to attend Richard E. Byrd Elementary School in third grade with Miss Remik on the Negishi Heights, Yokohama, Military Housing Complex. I have no school photos of this year. 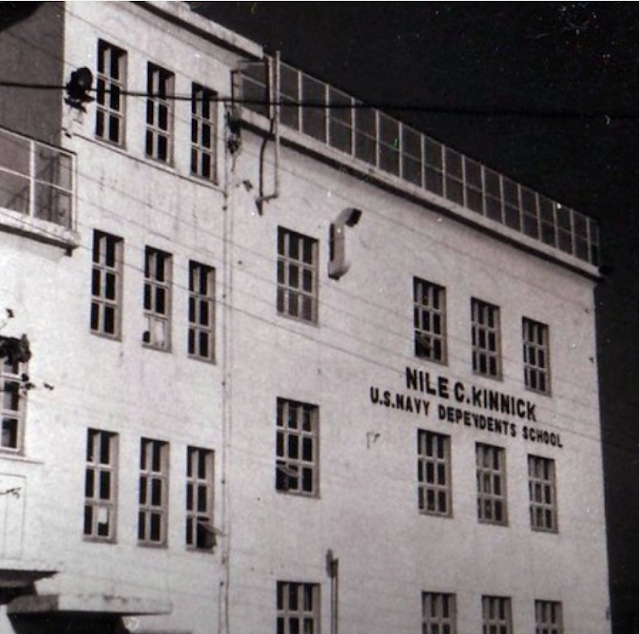 Gib attended Nile C. Kinnick High School in Yokosuka. He would have to wait for the daily bus to transport him between the two military bases. He obtained a school yearbook for his freshman year.

Our home was at the northern end of Skyline Drive. #643 is circled in red on the top left corner of the map. 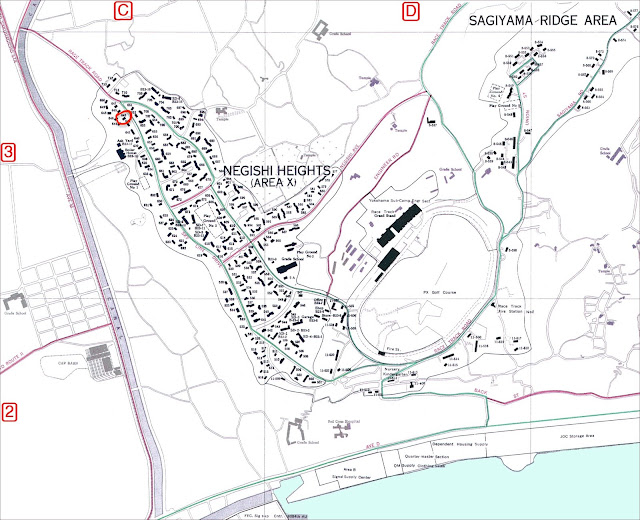 Mom making our lunches in the kitchen. 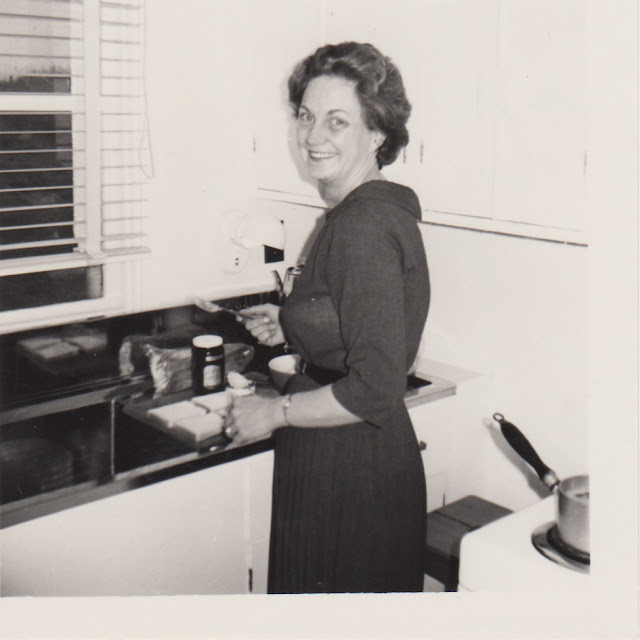 It was later blown down by a typhoon. 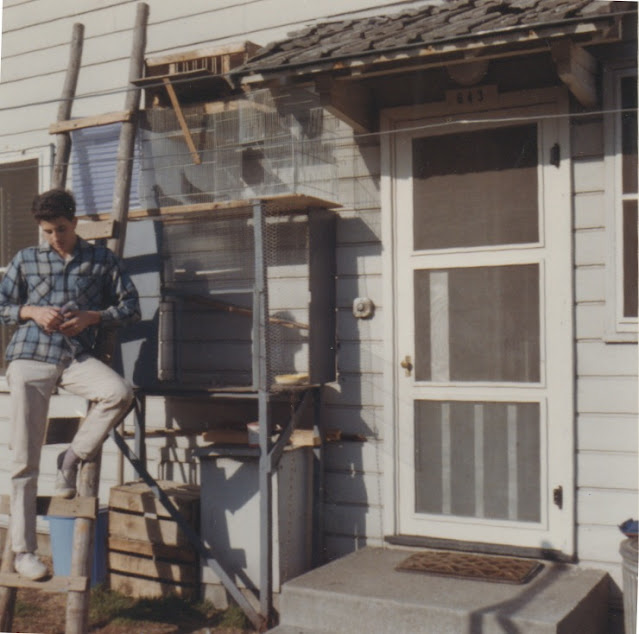 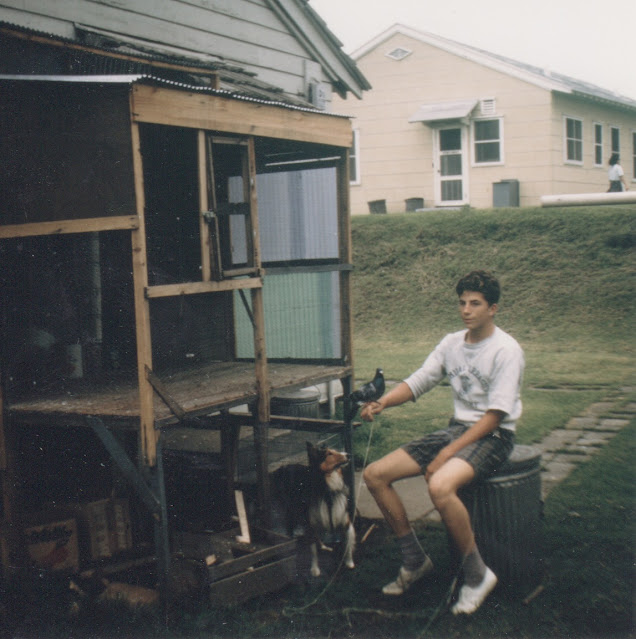 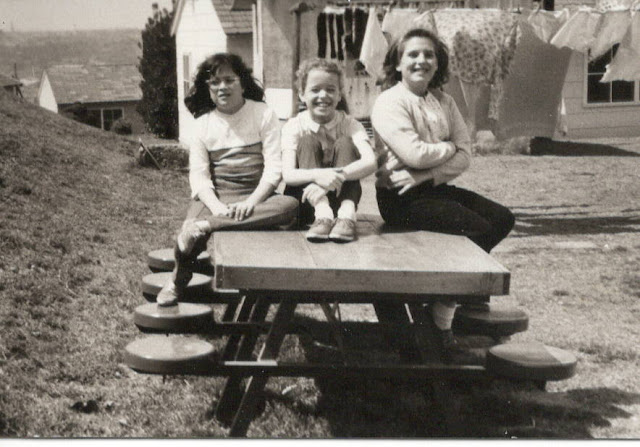 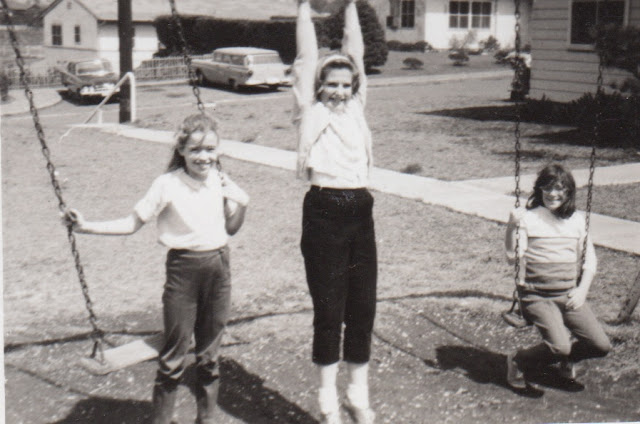 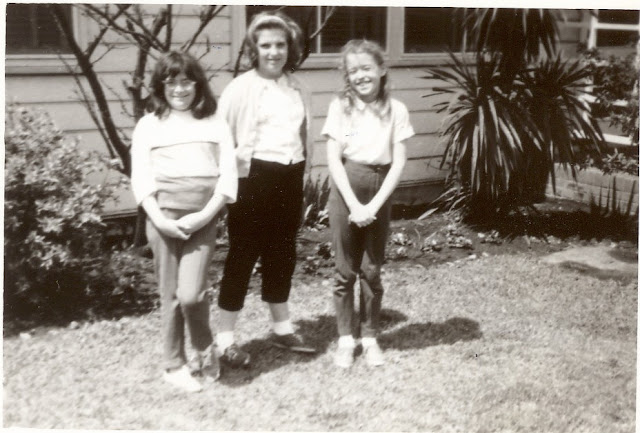 My father, with my help, built a snowman in the central area. 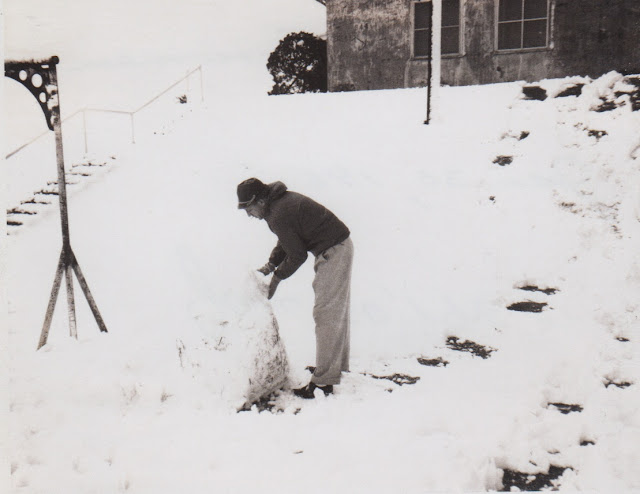 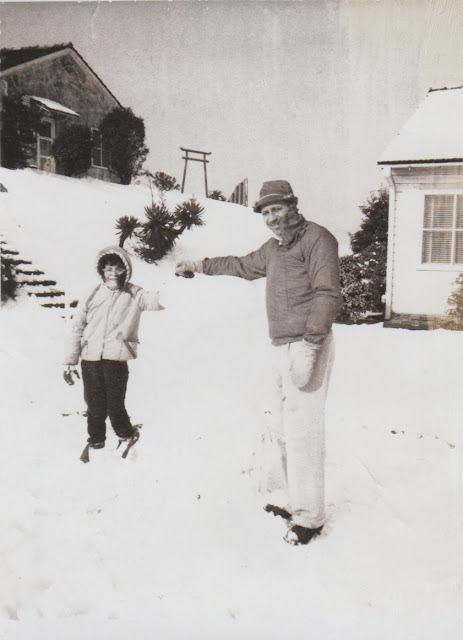 Tori Gate on the hill next to Donna’s house.

I remember shopping at the local Commissary, the Naval Exchange, & taking swim lessons at the pool. Susie & I with our swimming instructor. 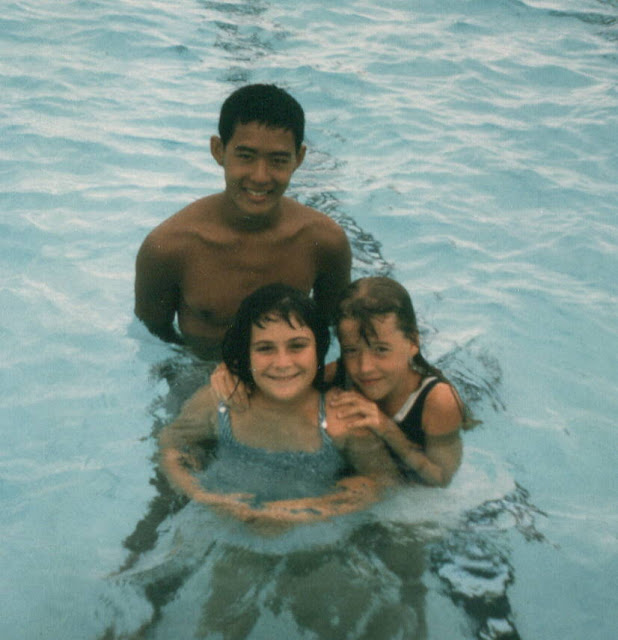 We left Negishi Heights in Sep 1965, taking a 6- week world tour through Southeast Asia, the Middle East & Europe returning to the United States. 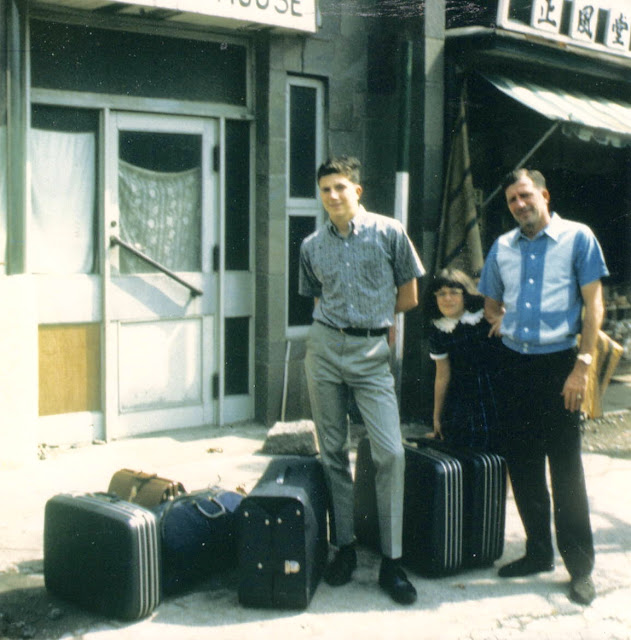 Sadly, in 1999, the area with houses #635 to #650 was lost in a landslide. I recently found this out through a FaceBook page about Negishi Heights. 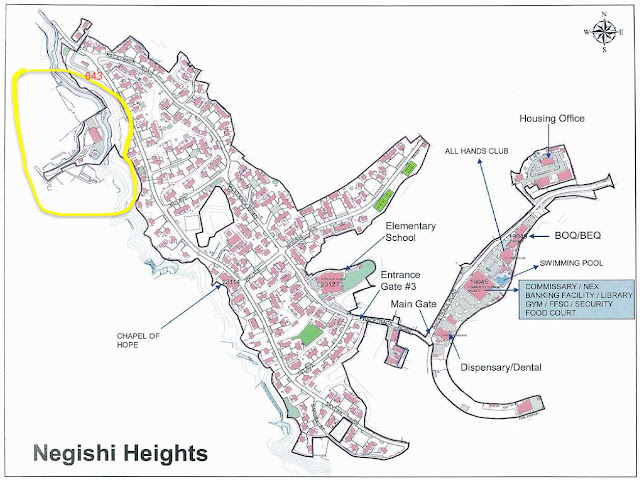 I have wonderful memories of our time in Japan. I was very fortunate, after my parents' deaths, that I found letters that they wrote to each other during this time period. During the 15 months that the USS Oklahoma City was stationed in Yokosuka, I only saw my father "at home" for 8 weeks. Normal for Navy BRATS. I will never forget Negishi Heights in Yokohama, Japan.

This house diagram of #643 Skyline Drive was shared with me by a colleague from the Negishi Heights group on FaceBook. Thank you! 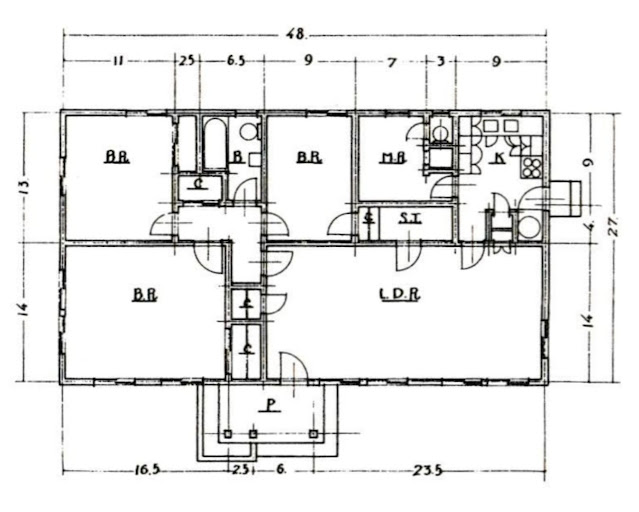